On April 6th 2011, German scientists carried out their first astronomical observations on board the Stratospheric Observatory for Infrared Astronomy, SOFIA.

On April 6th 2011, German scientists carried out their first astronomical observations on board the Stratospheric Observatory for Infrared Astronomy, SOFIA. A joint project between NASA and the German Aerospace Center (Deutsches Zentrum für Luft- und Raumfahrt; DLR), SOFIA is the world’s only operational airborne observatory. SOFIA flies at altitudes higher than 10 kilometres and thus is able to perform observations that are not possible with ground based telescopes, which are hindered due to absorption by water vapour. For the German partners SOFIAs operation is coordinated by the “ Deutsches SOFIA Institut” of the University of Stuttgart.

When on April 6th 2011 at 6.40 local time (15.40 CEST) SOFIA touched ground again at its home base, the Dryden Aircraft Operations Facility (DAOF) in Palmdale, California, Rolf Güsten and his team had successfully concluded their first science flight with GREAT - the German Receiver for Astronomy at Terahertz Frequencies. The instrument had pointed, among others, at IC342, a prominent intermediate spiral galaxy in the constellation Camelopardalis, and at the Omega Nebula (M17), a site of actively forming massive stars 5000 light-years from Earth. For both sources, the radiation from ionized carbon at 1.9 THz and high- rotational transitions of warm carbon monoxide were measured, demonstration the instrument’s ability to probe the interstellar medium in the environments of newly formed massive stars.

GREAT observed the strongest emission lines cooling the interstellar medium. The balance between heating and cooling processes regulates the temperature of the interstellar medium, thereby controlling the initial conditions for the formation of new stars. Co-Investigator Jürgen Stutzki from Cologne University explains: „The ionized carbon line, excited by the strong ultraviolet radiation from newly born stars, gives us unique insight into the physical processes and chemical conditions in the stellar nurseries. SOFIA will help to obtain a significant insight into how young stars form and change the clouds they were born in.”

After these first observing flights with GREAT the observatory will be opened for astronomers outside the project. “Astronomers from all German institutes could apply for scientific observations with SOFIA during summer 2011. They will use either GREAT or the US Faint Object InfraRed-CAmera for the SOFIA Telescope, FORCAST”, explains Prof. Alfred Krabbe, Head of the DSI at the University of Stuttgart. Alois Himmes, SOFIA Project Manager at DLR is quite pleased: “This first scientific flight of GREAT is the beginning of German-American scientific collaboration on SOFIA. We are confidently looking forward to the upcoming routine operations.” 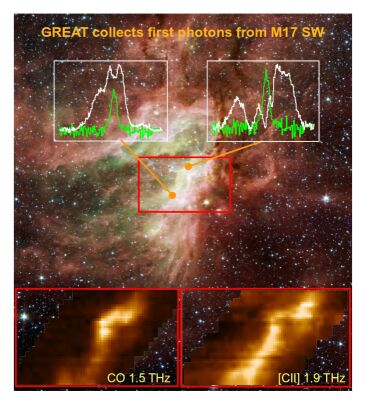 Figure 1: GREAT collected its first THz photons from the M17SW star forming cloud on April 06, 2011. Superposed on a near-infrared false-colour image measured by the Spitzer Space Telescope, we display selected spectra of ionized carbon ([CII], white line) and warm carbon monoxide (CO, green line). The high spectral resolution of GREAT is mandatory to study the velocity structure across the cloud as unveiled by the different line profiles. The field studied on the sky is overlaid on the infra-red image, and the velocity integrated distribution of [CII] and CO is displayed in the inserts at the bottom. The GREAT data probe the warm interface of the M17 molecular cloud exposed to the ionizing radiation of nearby massive stars.
Credit: GREAT Team (mit NASA/DLR/SOFIA/USRA/DSI). Background Image: Spitzer Space Telescope (NASA/JPL-Caltech/M. Povich, Univ. Wisconsin).

M17SW is a molecular cloud, containing about 10000 solar masses of gas that is illuminated by a cluster of young stars with a total luminosity of more than one million solar luminosities. The radiation from the cluster ionizes and heats the molecular gas, possibly compressing it into the state where more stars form from the compressed gas. The SOFIA observations permit to distinguish the effect of this radiative compression from the heating effect that would rather lead to an expansion. In this way, we can predict the future of the molecular cloud with regard to its star formation activity. 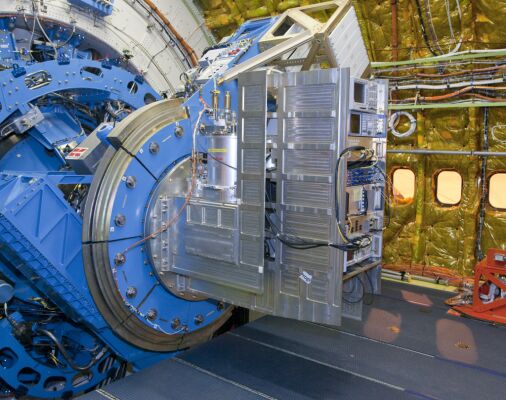 Figure 2: The GREAT-receiver, mounted on the telescope of the airborne observatory SOFIA. Image: NASA Photo/ Tom Tschida. GREAT, the German Receiver for Astronomy at Terahertz Frequencies, is a receiver for spectroscopic observations in the far infrared spectral regime between frequencies of 1.2 and 5 terahertz (60-220 microns), which are not accessible from the ground due to absorption by water vapour. GREAT is one of two first generation German SOFIA instruments, developed by the Max Planck Institute for Radio Astronomy (MPIfR) and the Universität zu Köln, in collaboration with the Max Planck Institute for Solar System Research and the DLR Institute of Planetary Research. Rolf Güsten (MPIfR) is the project manager for GREAT. The development of the instrument was financed by the participating institutes, the Max Planck Society and the Deutsche Forschungsgemeinschaft.

To the top of the page